It’s hard to miss the signs that this holiday season is in full swing – all the cocktail parties, sweet treats, festive decorations and, thankfully this year, lots and lots of snow in Tahoe.  I love this time of the year!

This is also a spiritual time for many and a time to reflect upon their faith.  Along with each different faith, there are certain beliefs and traditions of which influence the couple’s wedding ceremony.  These ceremonies can differ as widely as a bride’s personal style but they have one common purpose of uniting two individuals. 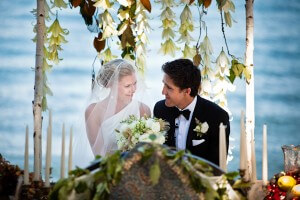 The Persian wedding ceremony is known as the aghd. During the aghd, the bride and groom are seated before a spread of traditional items, called the sofreh.  On the sofreh facing the bride and groom is a mirror, illuminated by candles on either side.  Many other items are placed onto the sofreh and each has its own symbolism with regard to prosperity that it may bring.  The married women in the family hold above the couple a canopy of fine fabric and grind two cones of sugar over their heads, to hope for a sweet life. 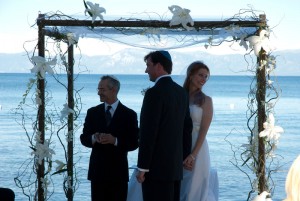 Before a Jewish wedding ceremony, the ketubah (marriage contract) is signed in the presence of two witnesses. The ketubah describes the husband’s responsibility to his wife: clothing, food, and marital relations.  This is often written as a manuscript and is framed and displayed in the couple’s home.

A traditional Jewish wedding ceremony takes place under a Chuppah – a wedding canopy.  The Chuppah symbolizes the new home being built by the couple when they become husband and wife.  It is traditional for the face of the bride to be veiled during part of the ceremony.  The veil is removed by the end of the ceremony, in a ritual called Badeken. 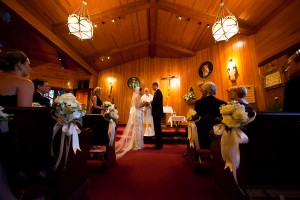 Catholic weddings are very traditional, rarely straying from their original customs.  The ceremony consists of biblical readings, a sermon, the exchange of vows and rings followed by additional prayers.  A very important element of a Catholic wedding ceremony is the Sacrament of Matrimony, a public sign that the couple gives oneself totally to the other person.  Catholic weddings must be held in a church and are not allowed to be held outdoors, to be valid with the church.

The processional is a key aspect of the Catholic wedding ceremony.  This usually consists of altar servers, the priest, witnesses, bridesmaids and groomsmen.  The bride is traditionally led down the aisle by her father. 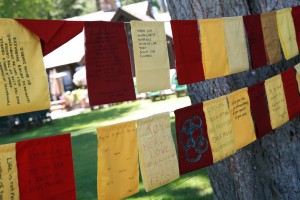 There is no standardized Buddhist marriage ceremony; however wedding ceremonies can be Buddhist if they are centered on the main beliefs of Buddhism and include traditional Buddhist elements.  There are two main areas of beliefs to add to your ceremony to make it a Buddhist ceremony.

First is the acknowledgement of the present moment, many of life’s special moments occur in the present.  Including the acknowledgement of the present in the ceremony is very traditional for a Buddhist wedding ceremony.  The second belief that should be a part of the ceremony is the feeling of interconnectedness. Ceremonies are intended to mark important events, allowing attendees to express their true feelings and share them with others is important to those attending a Buddhist ceremony.

Other traditional elements in the ceremony include having a short period of silence that allows all in attendance to have time to reflect on the wishes they have for the couple.  Another element is repeating a refuge or precept after the officiant.  The refuge or precept can be unique and re-written by the couple.  Adding poetry into the ceremony is another aspect of a Buddhist ceremony.  Lastly, having prayer flags around the ceremony is said to bring happiness, long life and prosperity to the flag planter and those in the vicinity.

Although all of these ceremonies are different, they also have some similarities – a processional, vows are read and rings are exchanged which represent the vows.  The last and final common tradition is ending the ceremony by the groom kissing the bride.  What better way to ending a ceremony then by sealing it with a kiss?